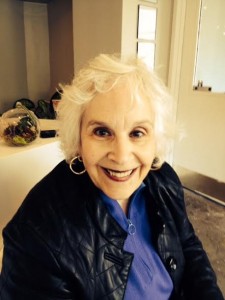 Kudos to performers Julianne Avolio, Brett Goodnack, Wali Jamal, Amy Landis and Jason McCune who are back again as participants.  They are sharp, quick, funny, talented actors in this radio-format series.

This ensemble performs seamlessly, almost effortlessly — transitioning from one character to another, developing different accents and ages, creating different sound effects with ordinary props as they guide us through an evening of fun and satire – all with a Christmas theme.  They are a well-balanced team with no weak links in the group.

The stage is set as a radio studio with all the paraphernalia one expects in that environment – large radio microphones, props essential for sound effects, an Applause Sign, an On Air sign.  The audience, at times, is reminded to participate and applaud when the Applause Sign blinks furiously.

If you close your eyes and listen to the dialogue and accompanying sound effects, you could imagine how original radio shows back in the 1940’s captivated, enticed and grabbed the attention of an audience not yet familiar with television.

Writers for “Holiday Spectacular” are Matt Henderson, Tessa Karel and Gayle Pazerski.  Henderson’s “Frightmere Ahead of Christmas:  An Off Brand Parody:” features Josh Skelebans (a Halloween character) trying to come to terms with a transition to Christmas.  Tessa Karel’s “Homestead Alone” is a parody of the movie “Home Alone”, with Pittsburgh references and characters.

Interspersed among the skits are Gayle Pazerski’s fake breaking news segments, among them “Danny the fourth Wiseman” and “The gift of the Magi couple” and hilarious radio show commercials written by Bricolage producing artistic director Tami Dixon.

Note: the musical performers vary at each performance.

Midnight Radio’s “Holiday Spectacular” is fun and family-oriented and a great way to welcome in the season.