A Christian widow, Trisha Lee (Amy Landis), must choose a side in her provincial Texan town when her teenage daughter proclaims she is genderqueer, and starts a GSA (Gay/Straight Alliance) at high school in Elise Forier Edie’s “The Pink Unicorn.”

Trisha believes that anyone born with a penis is a boy, and anyone born with a vagina is a girl. However, her overwhelming love for her daughter Jolene (who now wants to be called Jo), convinces her that the world isn’t just black or white, or, in this case, pink and blue.

After losing her husband, she refuses to lose her daughter. She encourages Jo to follow her own path, even if she doesn’t fully understand it. Trisha rails against her mother, the high school principal and her minister, Pastor Dick. 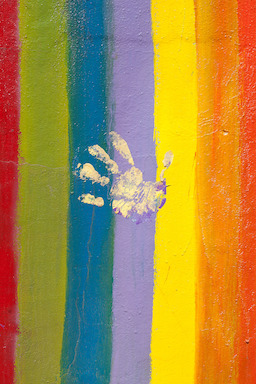 “The Pink Unicorn” is a treatise on love, religion and human sexuality, but it is also side-splittingly funny.

Trisha might not understand Jo, but she loves her daughter just the same. Trisha says, “Jesus said the most important thing is to love God, love your neighbor, and not judge one another. And yet there’s all kinds of judging and finger pointing going on in this town right now. St Paul himself says in Galatians, God don’t care about whether you’re a Jew or a Greek, slave or free, or a man or a woman. All of us are one in Christ. So if God don’t care if Jo is a man or a woman, why should I?”

Landis is fantastic as Trisha. Her strong performance exudes love and forgiveness. Trodding the boards in a solo show is a thankless task.  The actor has to garner the attention of the audience continually, from beginning to end. Landis excels at it. She is able to hold the audience in the palm of her hand. Landis gets to portray a variety of characters from the small Texan town, like the aforementioned Jo, a big, butch dyke, Enid Montgomery, a  petite-but-influential gay boy, Elijah Breckinridge, the hand-wringing (literally and figuratively) lavender-scented school principal Cyril Makepeace and a host of others.

It would be easy to make fun of this upstanding Christian woman thrown into circumstances she can’t understand, but neither Landis, nor director Ingrid Sonnichsen ridicule the character. They both treat Trisha Lee like a fully-realized, multi-dimensional human being, and it shows. It’s easy to laugh at Trisha Lee and love her at the same time.

All the action takes place on a very homey set designed by Adrienne Fischer. It’s like sitting down in your aunt’s living room and listening to her catch you up. It was one plastic sofa cover and candy spearmint leaf  or orange slice away from reminding me of my own childhood.

Ride the rainbow (or take the G2) to “The Pink Unicorn.”

“The Pink Unicorn” is in repertory at the Carnegie Stage, 25 W. Main Street, Carnegie, PA 15106. For more information, click here.