When Nikki (Anne Stockton) is grilled by a police detective, she turns the interrogation into her own personal therapy session in the world premiere of Anne Stockton’s “I won’t be in on Monday.”

Two expensive rings go missing in a large corporate firm in Manhattan, and administrative assistant Nikki Davis is among a short list of prime suspects. Nikki’s not worried. She knows she didn’t  pinch the precious possessions. She is, however, quick to dish the office dirt. She’s also more than glad to discuss her sex life with the handsome detective.

Note: You have to imagine the detective as handsome as he is not physically represented in the show. He is unseen and unheard. It’s an odd conceit of the show that you cannot hear or see James or his partner, Detective Adams, but you can hear an occasional sound effect.

The play starts slowly, but ramps up rather quickly. As the story unravels, so does our protagonist. Her grip on reality loosens, and full-on crazy takes over. But did she do the crime? That is the central mystery to the plot. 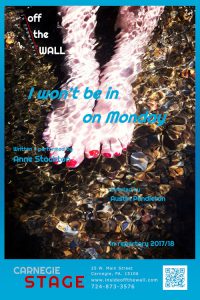 Director Austin Pendleton (“What’s Up, Doc?”) has directed Elizabeth Taylor on Broadway and has been featured in films opposite big stars in the Hollywood pantheon, like Barbra Streisand and Shirley McLaine. He has previously collaborated with Stockton on her other one woman show, “Speed Queen,” that also premiered in Pittsburgh (at the very same venue). While there are some similarities between “I won’t be in on Monday” and “Speed Queen,” they are vastly different characters. There is more humor in “Monday. Nikki sits in a chair on a desolate stage, and there is little movement, leaving Pendleton to concentrate his talents on the nuances of the actor.

Stockton wrote and performed “I won’t be in on Monday.” The playwright and actor, who is a also practicing psychiatrist by day, knows crazy. “Monday” is smartly written. It’s a complex examination of a woman with serious deep-rooted problems. There’s something vulnerable about the crazed admin. She’s desperate for love and affection. Stockton conveys that desperation with her eyes. There are some powerful moments to her performance.

Pet Peeve: It’s an actor’s job to create a physical world on stage. Whether they have props or not, space work is an important ingredient to making an audience believe that world. It’s distracting when the actor haphazardly flips and flops her fingers down on the iPhone, hastily jamming them into the device.  It’s a minor quibble but it breaks the willing suspension of disbelief.

Aside with a few minor complaints, its an intelligent piece of theater. Lighting Designer Betsy Chester adds another layer of whimsy to the show, especially when Nikki reminisces about her trip to the casino.

“I won’t be in on Monday” is an intense character study. If you loved “Speed Queen,” you can’t miss “Monday.”

“I won’t be in on Monday” runs this weekend at the Carnegie Stage, 25 W. Main Street, Carnegie, PA 15106. For more information, click here.