Its fear and misery in the Third Reich when a group of friends witness the fall of the Weimar Republic and the rise of Adolf Hitler in Tony Kushner’s “A Bright Room Called Day.”

When contentious factions of a political party split, evil rises (we’re not talking about Hillary Clinton, Bernie Sanders and the ascension of Donald Trump, but we could be). In the 1930s, as social democrats and communists in Germany refuse to work together, Adolf Hitler climbs to the top of the dog pile. For actress Agnes Eggling (Sarah Pidgeon) and her contemporaries the escalation of his power seems swift over a two year period.

Side note: Vealtninc Husz and Gregor Bazwald are double cast. They are played by Leon Schwendener and Carson McCalley respectively on alternate show times (consult the theater for their particular performances).

While Agnes and her pals watch the slow ascent of the Great Dictator, Zillah Katz (Aleyse Shannon) remains separate and aloof – watching the drama unfold from her distinct vantage point in the time/space continuum. She’s in 1980s America railing against the Ronald Reagan administration. Zillah basically points out that Adolf was the gold standard of evil. It’s hard to compare other monstrous world leaders to Hitler because of his audacious malevolence. Though she equates Regan’s silence through the AIDS epidemic with the gas chambers.

Meanwhile, several other monsters wander into the play. Cut to: stock photo of Steve Bannon. No, seriously.

Agnes is troubled by the wizened-but-voracious Die Alte (Diyar Banna), who appears to her in fevered dreams. She’s basically Agnes’ Gollum. Die Alte bends her crooked back, holds her gnarled hand inward and spouts off dark poetry about another ghoul, the Penny Man. The impish creature utters, “When the tree is black and bare, and the barren branches droop, don’t go to the kitchen where the Penny Man is making poison soup.”

There’s even a special guest appearance by the Lord of Lies. He’s been called Lucifer, Beelzebub or Mephistopheles. In “Bright Room” he’s called Gottfried Swetts (Clayton Barry), a purveyor of Spanish imports. His entrance is deliriously grand, heralded by a wolf with glowing red eyes. He is incredibly effective. Heinous and hilarious at the same time. The stuff of late night terrors.

P.S. Ten points for Gryffindor if you detect a heavy Brechtian influence.

It’s not “All’s Well That Ends Well” for the young German filmmakers, but there will be no spoilers here. Though it’s easy to surmise not everyone survives – its 1930s Germany after all. 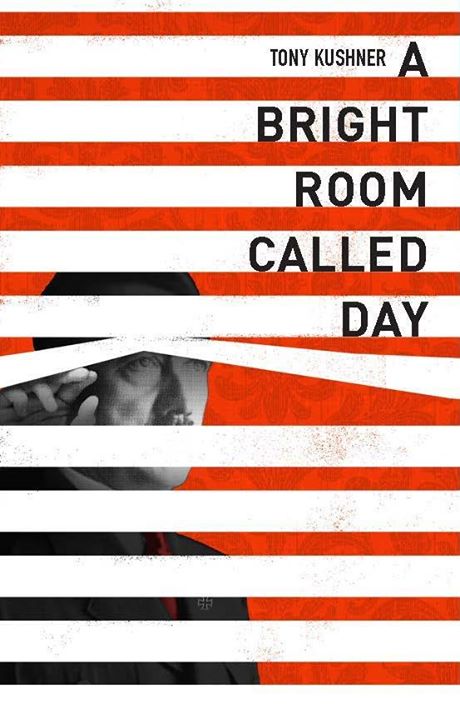 Pidgeon is loaded with charisma. She is engaging and intense in the lead role.

McMann is beautiful as Paulinka Erdnuss. She is regal and commanding and could easily be mistaken for a 1930s film star.

Additional and weird side note: At first, this reviewer heard “Paul Anka” whenever her name was mentioned. I guess smoke got in my eyes…ears.

There are some very fine performances by Brosnahan, Salinas, Shannon and Pearson. There’s not a bad apple, orange or lemon in the bunch (fruit, for some reason, holds a significant meaning in this play).

Aubyn Heglie and Orlando Davis also appear in the play in smaller parts, but they perform admirably.

Even though Barry is in one scene, he’s tremendous. He shines darkly with devilish glee. He’s ominous and funny. P.S. He looks very much like 90s television icon Steven Weber, who has appeared in everything from “Wings” to “iZombie.”

The parallels to the present run deep in “Bright Room” even though Kusher first presented the play in a workshop version in 1985. Baz even tries to find good in members of the Nazi party. He practically says, “There’s good people on both sides.” Holy April 2017, Batman!

There’s a lot going on in this three hour drama. It’s buoyed by talented actors, a sumptuous set and incredible special effects.

If ennui has overtaken you and you’ve grown tired of marching in the streets for Women’s rights, LGBTQ rights, Parkland Survivors and science, and you need a little boost to get you back in “Resist” mode, head over to “A Bright Room Called Day.” You’ll be painting signs in the lobby by intermission.