A lyricist collapses from an arteriovenous malformation in his brain, and needs a craniotomy in William Finn’s semiautobiographical musical, “A New Brain.”

While trying to compose a song for a children’s show, Gordon Schwinn (John Wascavage) starts to unravel. He’s writing pabulum instead of producing great work and the frustration is wearing him down. At lunch with his agent, Rhoda (Meredith Kate Doyle), he gets dizzy and hallucinates. He pictures Mr. Bungee (Matthew J. Rush) the tyrannical puppet master and puppet from the kid’s show he works on. Before his entrée arrives, he slumps over. Soon, paramedics arrive and he’s off to the hospital. His mother, Mimi (Becki Toth) rushes to his side, trying to whole-heartedly convince herself that everything is going to be A-Okay in show-stopping number, “Mother’s Gonna Make Things Fine.”

Gordon is attended by two nurses – one mean nurse, Nancy D. (Lauren Maria Medina), and one nice nurse, Richard (Brady D. Patsy). Dr. Berensteiner (Pierre Mballa); and the Minister (David leong) also tend to his needs – medical and spiritual (though Gordon has little use for the padre).

Before going under the knife, our hero is awaiting the arrival of his boyfriend, Roger (Jeremy Spoljarick), who is off sailing. Roger docks before the operation. The boyfriend pleads for one last night together before the operation, but Gordon chooses to work on peppy kid’s tune, “Yes” for the TV show instead.

Snarky side note: They won’t be doing this one at the Palisade Playhouse.

As Gordon awaits his operation, the audience gets a glimpse into the lives of the people around him, Roger, Mimi and even the flamboyant, nice nurse, Richard. We also peer into the life of Lisa (Drew Leigh Williams), a homeless woman looking for change – monetary and…perhaps some physical, spiritual or mental change as well.

Additional snarky side note: Drew Leigh Williams is very attractive and the production team dressed her down in jeans and flannel to portray Lisa, but she still looked too lovely to be homeless. Her look is reminiscent of Lucille Ball, when Lucy Ricardo would dress up like a bum but still wear her famous matte red lipstick and Max Factor eye shadow.

There are a lot of peripheral characters in “A New Brain” and they all get some nice moments. A Waitress (Mei Lu Branum) sings about the specials of the day. Homeless Lisa gets a song (HomeLisa). Big Gay Richard gets a song. Everybody gets a song! It’s like an iPod set to random. It’s a bit disjointed. Luckily, they are all glorious little tunes, and they are all sung beautifully. 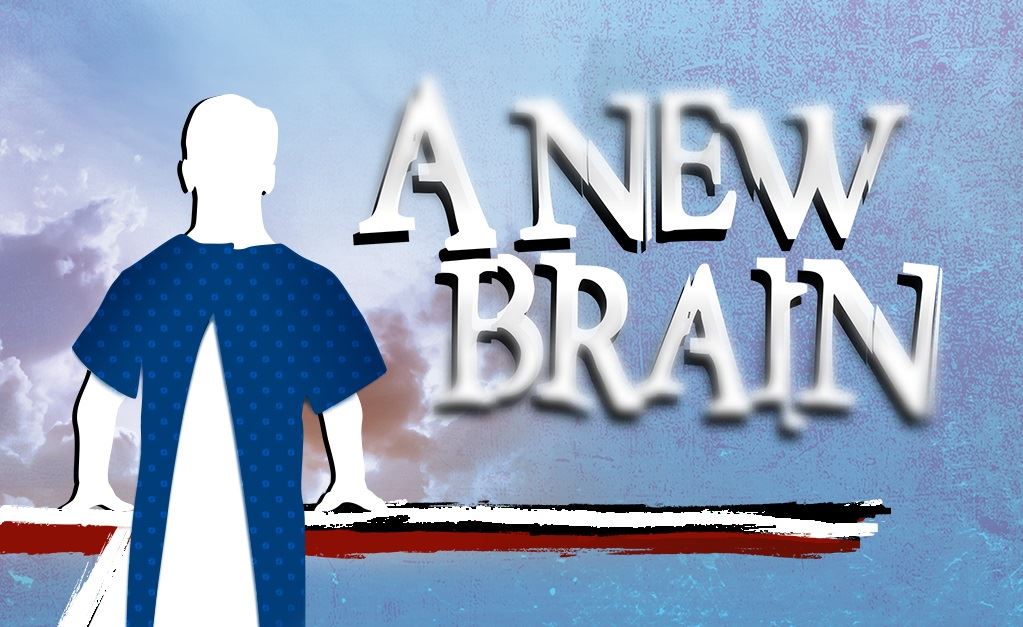 The cast is perfect. Every single one of them.

Wascavage is a delight as the neurotic composer.  Finn’s Schwinn is hard to like. There’s an edge to Gordon’s acerbic personality; Wascavage softens it, but never dulls it.

Toth is outstanding. She belts out every tune, and hits every note. She’s Pittsburgh’s very own Ethel Merman. Mimi is very much like every Merman character from Rose in “Gypsy” to Mrs. Marcus in “It’s a Mad, Mad, Mad World!” She’s a joy to watch in every scene and every song.

Spoljarick does a fantastic job as well.

Rush is (literally and figuratively) armed with the world’s cutest despot, Mr. Bungee, the Anti-Kermit, who is more martinet than marionette. Rush is magnificent as the malevolent Muppet (say that three times fast).

Patsy gets some great moments to shine with “Poor, Unsuccessful and Fat” and “I’m Eating Myself Up Alive” are really fun songs delivered beautifully with his rich, deep voice.

Williams gets several bright moments as well. Her duet with Spoljarick, “A Really Lousy Day in the Universe” is stunning.

A live orchestra led by Deana Muro is seated somewhere below the stage, invisible but invincible.

There’s a wildly imaginative set by Frank Blackmore. Picture it, a piano with pages and pages of music sheets flying upward toward the ceiling in a tornado of potential melodies.

Director Connor McCanlus does a marvelous job directing. The pace is quick and the wit is served very dry. It’s a very brisk and kinetic.

Side note: There is no intermission: watch your fluid intake and plan accordingly.

While “A New Brain” is a heavy subject for a musical, and the characters and plot are scattered like the sheets of music on the set, but it’s still a wonderfully fun work of art.